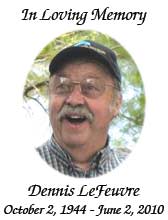 The community hatchery initiative began in 2001 with the realization that local trout fisheries in our area were declining. Previous stocking efforts had been providing large-bodied fish that did not reproduce well in our smaller in-land lakes, especially under changing climate conditions. Following several community meetings, a group led by Dennis and Mary LeFeuvre decided to create the North Hastings Community Fish Hatchery with the support of many sponsors and partners. Construction of this state-of-art hatchery facility began in 2007, and volunteers have been producing fish since 2008.

The hatchery is raising a unique local strain of Lake Trout (named the ‘jewel’) that has adapted over time to the conditions in our area and is more likely to sustain healthy lake trout populations into the future. In recent years, the hatchery has also expanded production efforts to include brook trout and brown trout.

This hatchery was the vision and dream of Dennis LeFeuvre. He was a founding member and driving force in its development. Dennis passed away suddenly on June 2, 2010 but lived long enough to see Jewel lake trout start their life cycle in the hatchery and be stocked into local lakes. This hatchery is his legacy to our community.